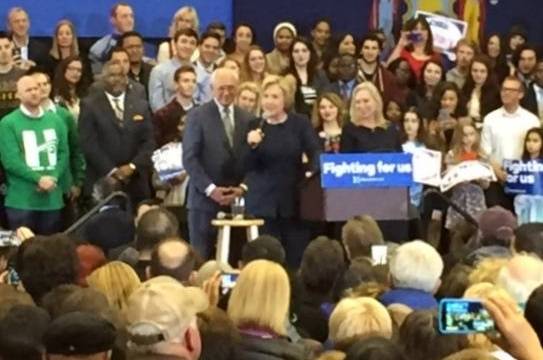 With less than three weeks before elections, Hillary Clinton is even further ahead of Donald Trump in New York State, and that could affect down-ballot races, including seats for the state Senate.

Hillary Clinton is 24 points ahead of Donald Trump , at 54 to 30 percent ,a jump from when Siena College did a survey in September. Spokesman Steve Greenberg says the biggest change is independents moving over to the Democratic Presidential candidate’s camp. A 2 point lead among independents for Clinton has grown to a 17 point lead.

The poll was conducted beginning last Thursday after the controversy exploded over Trump’s alleged sexual harassment and assault of women.

Trump supporters said earlier this year that the GOP candidate would compete in New York, but since the political conventions, Trump has made only one appearance in New York, to accept the state’s  Conservative Party’s endorsement  in Manhattan in early September.

The increasing lopsided race for President in New York may have its impact on down ballot races, which is important in the state Senate, where Republicans are attempting to maintain majority control against the growing number of Democrats.

Greenberg says not only will more New Yorkers likely vote for Clinton, they are also more likely to vote Democratic in the second race that will appear on the ballot, the competition for the US Senate seat. The poll finds Senator Chuck Schumer with a huge lead over challenger Wendy Long, 66 to 27 percent, and even 31% of Republicans back Schumer.

“That means that a third of Republicans, two-thirds of New York voters are voting Democrat for US Senate,” Greenberg said.

But Greenberg says that does not necessarily mean that Republican candidates for Congress and State Senate are in trouble- he says New York Republicans, as well as independents, and even some Democrats,  are used to splitting their ticket.

“New Yorkers have shown that they have no problem voting for Democrats for some offices, and Republicans for other offices,” Greenberg said.

State GOP Chair Ed Cox, speaking before the poll was released, predicts that Republicans running for the Senate, and Congress aren’t going to have to worry, and that Trump will actually help them.

“I think  down ballot we’re going to do very well,” Cox said.

Senate Democrats, who are trying to take back the Senate, disagree with that theory. In a statement, Senate Democratic Campaign Committee Spokesperson Mike Murphy says the poll “shows just how big a drag Donald Trump will be on the Senate Republicans”.