Following a spirited debate, the New York State Assembly approved a bill to allow undocumented immigrants to obtain drivers licenses. It’s not a done deal though, and it faces resistance in the State Senate.

On the Assembly floor, opponents raised a number of concerns over the measure.

Assemblyman Robert Smullen, a Republican from  Herkimer, and a  former Marine, says he worries the licenses could provide a back door for criminals and even terrorists to obtain documents for nefarious purposes.

“I understand the chances of a terrorist invading our security measures are slim, and we would desirably want them to be so to not have repeat of September 11,” Smullen said. “But I’m really concerned we are going to create a new avenue for someone to evade the law and obtain other legal documents.”

Assemblywoman Nicole Malliotakis, a Republican from Staten Island, says the state’s association of county clerks is against the bill, because they do not believe they have the technical savvy to verify foreign passports.

“We have to be mindful of those who also want to do us harm,” said Malliotakis. “That is something I don’t think this bill takes into account.”

Assemblyman Mark Walczyk, of Watertown, says he’s heard concerns from his local Board of Elections about the possibility of illegal voting, if the non- citizens are inadvertently signing up at the DMV to vote.

“They don’t have the ability to purge those records of non citizens,” said Walczyk.

Bill sponsor Marcos Crespo, a Bronx Democrat, says opponents are making an “erroneous connection” when they link the measure to a potential act of terrorism. And he thinks Board of Elections staffers are sophisticated enough to catch any errors. And he says undocumented immigrants are unlikely to want to vote illegally, because that would be a crime and would subject them to ICE and possible deportation.

“I assure you, there is not a single individual in the immigrant community who wants to put themselves at risk of deportation, and would not seek to do that,” Crespo said.

Supporters of the bill, including Democrat Phil Ramos of  Long Island, says the bill will make all New Yorkers safer, because undocumented immigrants will learn to drive, and buy car insurance. He says states that already have the law have found a drop in hit and run accidents, because undocumented drivers are no longer tempted to flee the scene of an accident.

Ramos, who was formerly a police officer, says the drivers licenses will actually help law enforcement if an undocumented immigrant is involved in a crime, because police will have their name and address.

He accused opponents of “slicing and dicing” the bill to hide what he says is their real reason against it.

“We know what it’s about, it’s about the people we are giving licenses to. Just say it,” said Ramos, who said immigrants have been “demonized”, by some politicians who seek to gain the anti- immigrant vote .

“Some people don’t want immigrants to get licenses,” Ramos said.

Assemblywoman Catalina Cruz, a Democrat from Queens, who was undocumented as a teenager, says her support of the bill has generated hate mail and even death threats.

Cruz, whose mother was present for the debate, says her Mom had to turn down jobs when Cruz was growing up, because she could only work at a job on a subway or bus line which she says pushed her family “deeper into poverty”.  She says her mother’s inability to drive led her  to miss important events in Cruz’s life, including when she received honors at her college graduation.

“I stood on stage alone, “ Cruz said. “Because my mother couldn’t attend the ceremony. She wouldn’t be able to make it to the ceremony after work using the subway.”

The measure faces an uncertain future in the State Senate, where some moderate democrats have reservations. 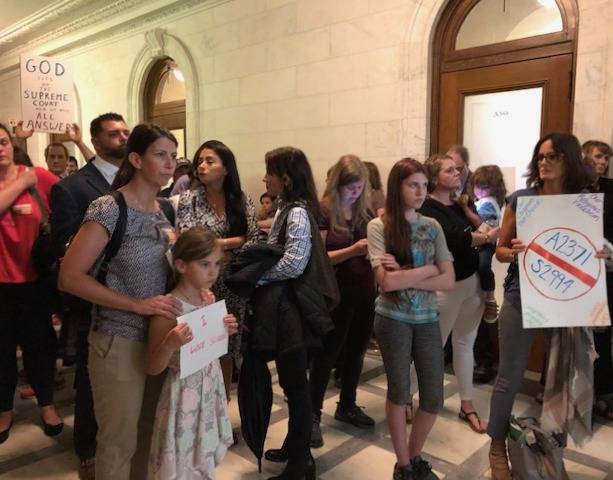