Fracktivists, as anti hydro- fracking activists are called, hope to play a role in New York’s Presidential primary. They are asking Democrats Hillary Clinton and Bernie Sanders, as well as Republican candidates, to take a stand against the Constitution pipeline and other natural gas pipelines, that if approved could criss- cross the state.

More than 200 fracktivists held a rally to oppose natural gas pipelines in New York, and to call on Governor Cuomo to ban them.

Robert Kennedy Junior is the attorney representing the  opponents of the Constitution pipeline, through the  Pace (University) Environmental Litigation Clinic , which he founded.

In a speech to the cheering crowd on the steps of the Capitol, Kennedy says the present system favors what he calls the “dirtiest fuels” from “hell”.

“Rather than the cheap green wholesome and patriotic fuels from heaven,” Kennedy said.

The very politically involved fractivists are hoping to play a role in the Presidential primary in New York, as well.  They want Hillary Clinton and Bernie Sanders to go on record against  building more pipelines for fossil fuel based energy. Kennedy , who did not say who he backs in the primary, says he has also written both campaigns, asking for their views on the issue. He says the movement already convinced Governor Cuomo to ban fracking in New York.

“These are people who vote,” said Kennedy who said it takes devotion to stand outside in 20 degree weather to hear speeches, , then march several blocks to the New York State Department of Environmental Conservation, for another demonstration.

“There’s two things that drive politics in our country. One is money and the other is intensity,” Kennedy said. “You’re looking at intensity right here.”

In 2014, many fracking opponents voted for Zephyr Teachout against Governor Cuomo in the Democratic primary, and Teachout won several upstate counties where fracking had been proposed.  Teachout was against the natural gas extraction process. Shortly after he won re election, Cuomo outlawed fracking in the state. Cuomo, who is the ex brother in law of Kennedy, has so far not taken a position on the pipelines.  His environmental agency says it will review the pipeline permits and make a decision based on “sound science”.

The Democratic candidates for President voiced their views on fracking in a March 6th debate on CNN.  Clinton told Anderson Cooper that she supports fracking only when local governments approve, when companies reveal what chemicals they are using in the fracking fluids, and  if they can prove they are not polluting the water or the land.

“By the time we get through all of my conditions, I do not think there will be many places in America where fracking will continue,” Hillary said.

“My answer is a lot shorter,” Sanders said. “No, I do not support fracking.”

For Walter Hang, an Ithaca based fractivist with the group Toxics Targeting, says that’s not enough. He says while Sanders’ positon on fracking is much more to his liking than Clinton’s, he want to know more about the related pipeline debate and is conducting a petition drive.

“These candidates have to spell out their positions much more clearly,” Hang said. “They’re sophisticated, they’re knowledgeable  and they need to know what’s going on before they cast their votes on April 19th.”

Tensions over the issue were highlighted recently when a Greenpeace supporter questioned Clinton at a rally in New Paltz about donations from fossil fuel companies. She displayed frustration, saying she was “sick” of  Sanders supporters  lying about her record.  The Greenpeace member was not connected with the Sanders campaign.

Hang and other fractivists are planning to hold demonstrations outside Clinton and Sanders events in New York over the next couple of weeks as the primary date approaches. 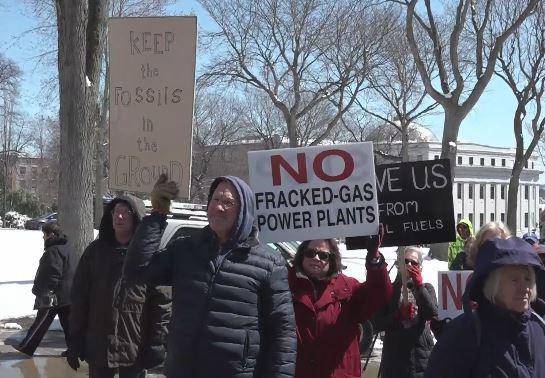