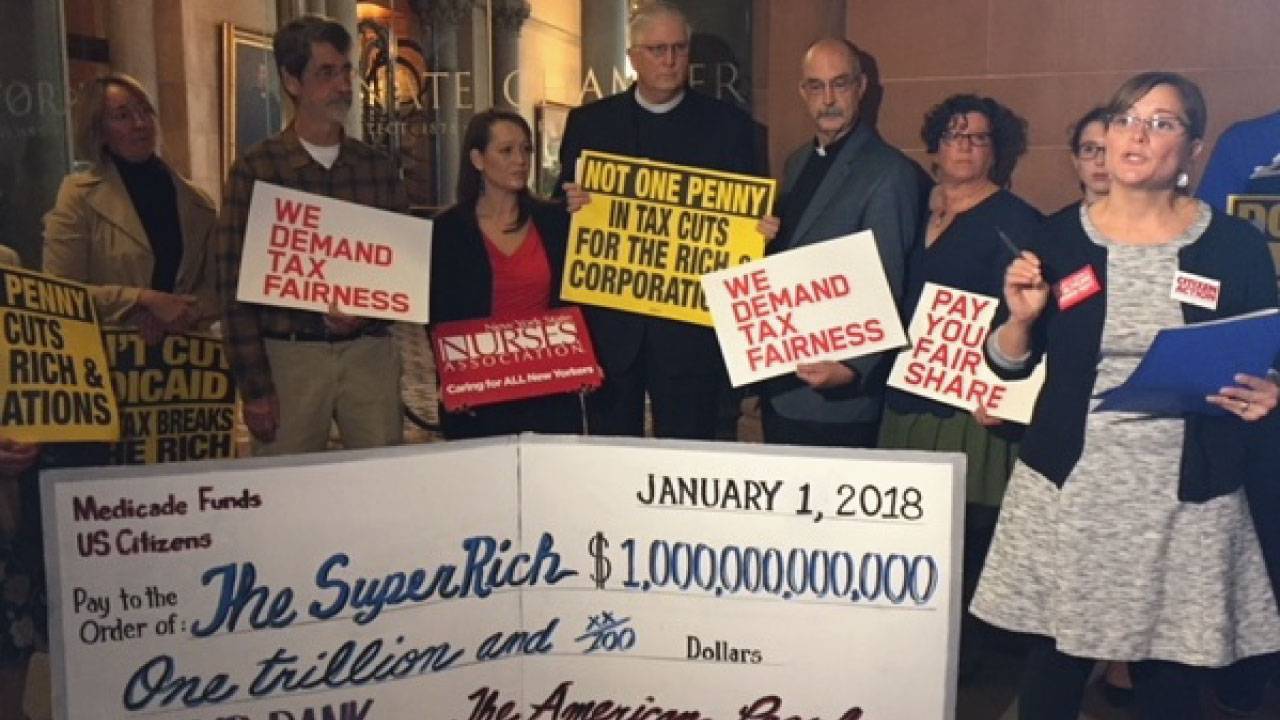 Governor Cuomo is slamming the tax overhaul plan passed by the House of Representatives, saying it will be “poison” to New York.

A range of groups, from businesses, school leaders and progressive activists in New York also spoke out against the House vote and the provision to end the state and local tax deduction, saying they will be harmful to state residents.

The governor also criticized the tax plan as a corporate giveaway.

“This is a federal scam that they are running,” Cuomo said. “They call it a tax cut for the middle class. That’s baloney.”

And Cuomo predicts that corporations won’t use their tax reductions to raise wages for workers, but will instead increase dividends to shareholders.

And he says the elimination of the state and local tax deduction will harm New York and result in double taxation. He called out New York’s congressional members who voted for the measure as “reprehensible” and “treasonous”.

Congresswoman Claudia Tenney, who voted for the tax bill, shot back at Cuomo, saying in a tweet “New Yorkers face a crippling tax burden because of Albany politicians like Gov. Cuomo, corrupt former Speaker Silver, and Anthony Brindisi. It’s time for Albany to stop raising taxes on hardworking families who continue to fall behind (because) of Cuomo’s out-of-control spending habit”.

Brindisi, an Assemblyman, is challenging Tenney for her seat in Congress. Silver faces charges in a second federal corruption trial next year.

The state’s comptroller, Tom DiNapoli, also weighed in, saying both the House and Senate plans are “profoundly bad deals for New York”.  The Comptroller says the tax plans could also result in higher costs for municipal bonds, which would drive up state and local expenses for infrastructure investments.

The Council of School Superintendents executive director Chuck Dedrick says ending the state and local tax deduction on federal income tax forms could lead to less money for schools and have some unintended consequences.

“There’s a lot of concern that schools, in the long run, are going to be hurt incredibly,” Dedrick said.

The school superintendents say in a relatively high tax state like New York, the highest income taxpayers would be forced to pay thousands of dollars more per year in taxes if they are no longer able to deduct state and local income taxes. The fear it could be the tipping point for relatively mobile wealthier people to move their primary resident elsewhere, leaving the state with less revenue to fund schools.

Mary Beth Fiore, Superintendent of the Elmira Heights school district in the Southern Tier, predicts the provision will “impact every community and every household” in the state.

The superintendents cite a study from the fiscal watchdog group the Empire Center, which finds that if just 250 of the highest income New Yorkers leave the state due to the resulting higher taxes, the state could lose $500 million dollars in revenue. They say since school aid is the largest portion of the state budget, that could adversely affect the flow of money from the state to local districts.

Patricia Sullivan- Kriss, Superintendent of Schools in West Hempstead in Nassau County on Long Island, says the loss of the deductions could also affect school budget votes. Imagine, she says taxpayers who find out in March or April that they can no longer deduct their state and local taxes, and have to pay a higher tax bill. Then, in May, they are offered the chance to vote on school district budgets.

“We may have angry citizens, rightfully so,” Sullivan- Kriss said. “they may indeed not support us.”

The school leaders say they are further squeezed by New York’s tax cap that limits property tax increases to no more than 2% per year. A supermajority vote of 60% is required to override the cap. The superintendents say schools would be limited in their ability to raise taxes to make up for any state cuts in school aide.

“Overall we’re very supportive of the tax reform efforts,” said Hutchins. “But we feel that the elimination of SALT is unnecessary and will further exacerbate what already is a huge discrepancy in the amount of money New York sends to the federal government and what we receive back.”

Progressive groups, who don’t often find themselves on the same side of the Business Council held a last-minute demonstration against getting rid of the deduction. Michael Kink, with Strong Economy for All, called on New York members of Congress who said they supported the bill to change their minds.

“Every single member of the New York House delegation should be voting no,” Kink said. “Because it hurts their constituents.”

In the end, all of the House Democrats in New York voted against the measure, as did Republicans Peter King, Lee Zeldin John Faso, and Elise Stefanik. In addition to Tenney, GOP members John Katko, Tom Reed and Chris Collins also voted yes.