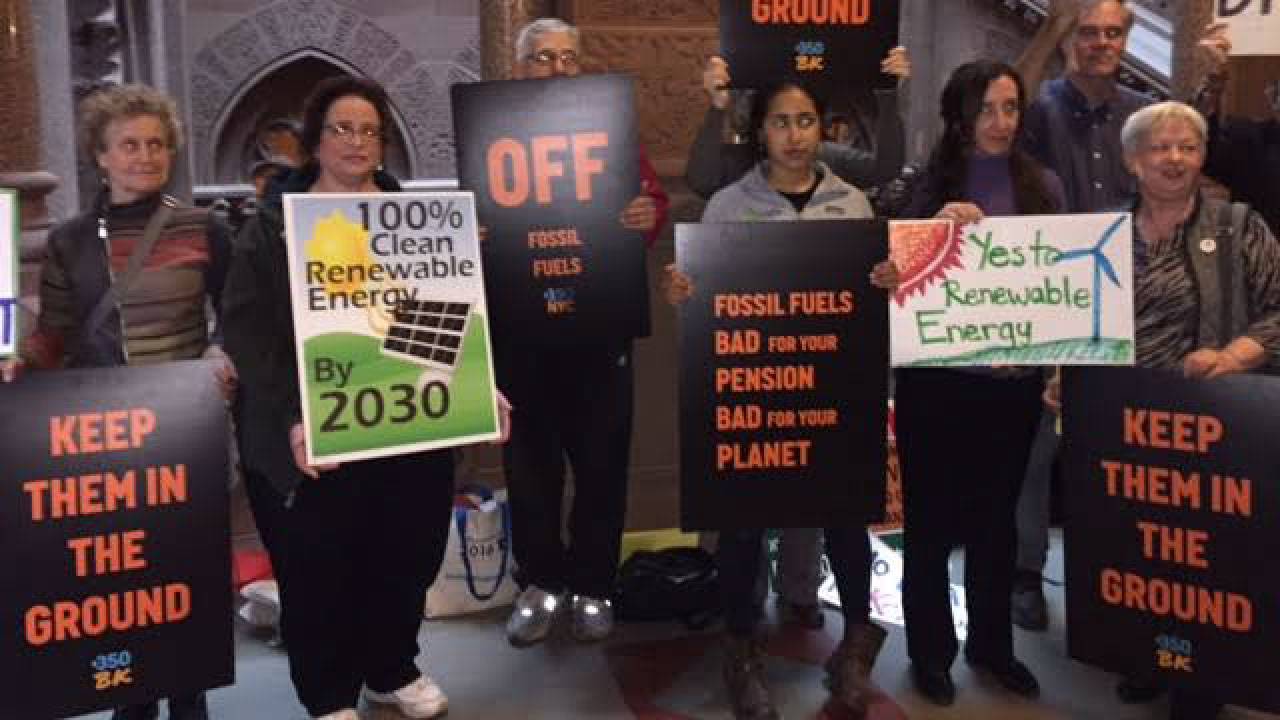 Some lawmakers are pressing the state’s Comptroller to divest the state’s pension fund from the fossil fuel industry. But Comptroller Tom DiNapoli says he believes he can be more effective in changing the company’s behavior by acting from the inside.

A worldwide movement to encourage public institutions like universities, and municipalities, to divest from the fossil fuel industry is targeting the state’s pension fund. Mark Dunlea, with the group Divest New York, says with an administration in Washington that essentially does not believe in climate change, it’s more important than ever for states like New York to take steps.

“Particularly at a time when the federal government seems to be controlled by climate deniers under the Trump administration,” Dunlea said. “It is so critical that we see more effort at the state level.”

The measure would require the pension fund to stop investing in the world’s top 200 fossil fuel companies in the next five years, and divest from coal companies within one year from when the law is passed. It has won the support of some state lawmakers, including Democratic Senator Liz Krueger, of Manhattan.

“New York State and other governments ought not to be investing in the exactly the kind of fossil fuels we’re trying to discourage everyone from using,” Krueger said.

The pension fund has around $5 billion dollars in investments in fossil fuel-related industries, out of an over $178 billion dollar fund.

The measure does include some safeguards to protect the state’s more than one million retired public workers.  If the divestment resulted in a more than .5% drop in the value of the pension fund, the comptroller would able to reverse course.

The state’s Comptroller, Tom DiNapoli, does not support the measure. He says he has more sway with the fossil fuel companies by remaining a major stockholder and advocating at shareholder meetings for change.

“The divestment movement is too simple a way to try to attack a very complex problem,” said DiNapoli.

The Comptroller says it’s “unrealistic” to think that if the pension fund were to sell all its shares in a company like Exxon Mobil, that the corporation would substantially change its ways or go out of business.

“It’s better that we have a seat at the table, as a shareholder,” DiNapoli said.

As recently as this past February, DiNapoli and other major investors of Exxon Mobil, including the Church of England, led an effort at the shareholders’ meeting to press the company to report to investors how its business, and future profits, will be impacted by the international Paris Climate agreement and the efforts by many nations  to cut down on their use of fuels that produce greenhouse gases . The measure received the support of more than one-third of shareholders.

Senator Krueger, who is often an ally of DiNapoli on numerous issues, says in this case, she disagrees with his approach, and she does not believe that the fossil fuel companies will change due to shareholder pressure.  She likens them to the history of the movement to try to change the behavior of the tobacco companies.

DiNapoli says he agrees with the goals of the divestment movement and also wants the fossils fuel companies to change, but he says he also has a responsibility to the retirees and the health of the pension fund, which is one of the strongest performings in the nation. He says “at a time where we have a national administration that’s even denying that climate change is happening and they’re trying to decimate the EPA”,  it doesn’t make sense to fight each other.

Supporters of divestment say holding the stocks from fossil fuel companies could eventually become a liability. If fossil fuels are phased out as a primary energy source, an investor could be stuck with so-called stranded assets- investments that are no longer worth much monetary value.

Big oil and gas companies are aware of the potential future danger, and many are already hedging their bets by investing in wind and solar, and putting money into research and development to increase the efficiency of renewable fuel sources.