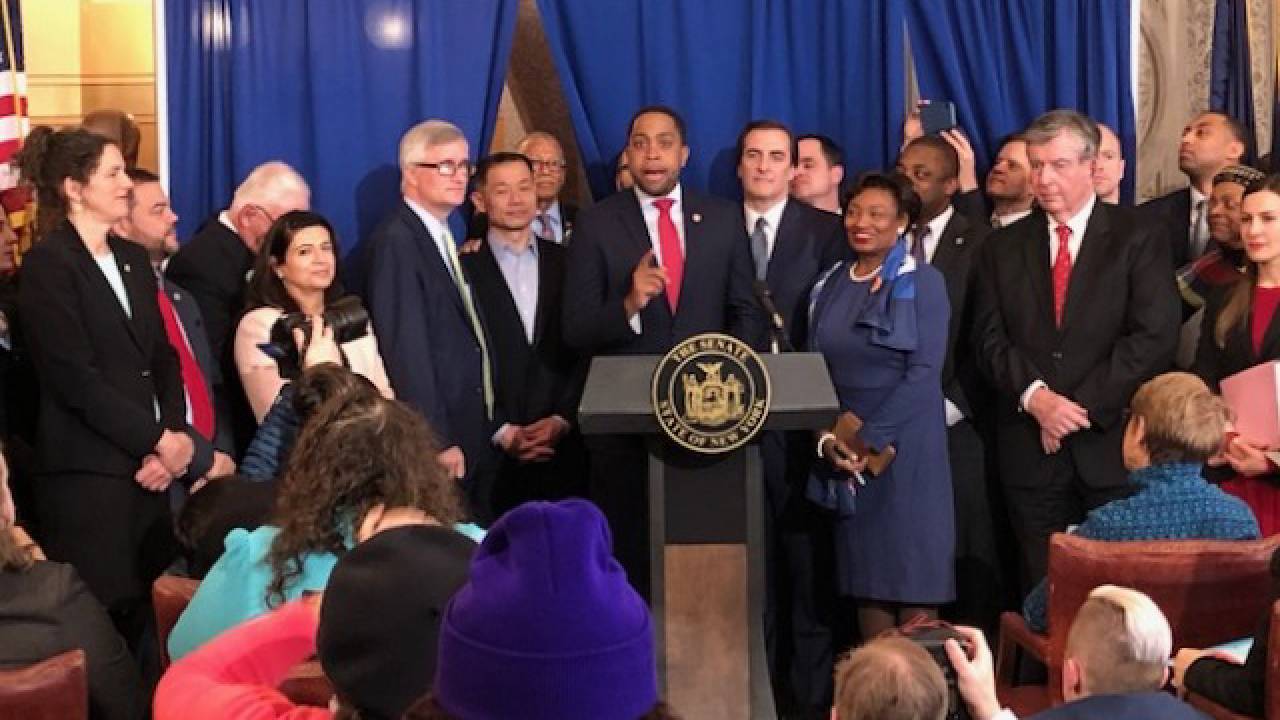 The Senate and Assembly are approving measures to expand the window in which New Yorkers can vote in elections, from one day to 11 days. The action comes at the start at what is anticipated to be a busy week at the State Capitol that includes the release of Gov. Andrew Cuomo’s budget plan.

Senate Democrats, led by Sen. Andrea Stewart-Cousins, held a victorious press conference before the vote. It was packed with advocates chanting “Let New York vote.” They have worked for years to have New York join 37 other states and allow early voting.

“It’s time for New York to catch up so that we can actually lead,” Stewart-Cousins said to cheers.

The bills open up some polling places in New York 10 full days before Election Day, so that voters can cast their ballots at an earlier, more convenient time. The bill provides for one polling place to be open early for every 50,000 voters. If signed by the governor, the expanded voting will be in effect for the November elections.

Another bill would allow “no excuses” absentee voting, so that anyone is eligible to cast a mail-in ballot. But that change requires an amendment to the state’s constitution, and the process can’t be completed until the 2021 election cycle.

Other measures consolidate New York’s separate state and federal primary election days into one voting day in late June. New Yorkers who move within the state would no longer have to re-register to vote. And 16- and 17-year-olds could sign up early, so that all of the paperwork to vote is finished before they turn 18 and can cast a ballot.

Senators and Assembly members also moved to close a loophole in the state’s campaign finance laws that allows individuals and companies to form limited liability companies, or LLCs, to skirt donation limits.

Stewart-Cousins said all of the measures were long stalled by Republicans in the state Senate, who ruled the chamber for most of the past century until they were defeated in the 2018 elections.

“We are really trying to clear a backlog of things that we have been waiting to do,” she said.

Susan Lerner, the longtime director of the government reform group New York State Common Cause, was among those cheering. She said she’s waited over a decade for what she calls a “fabulous beginning” to election reform in New York.

“We now have a Legislature that is interested in listening to the voice of the voters,” Lerner said. “And that’s what we are seeing today.”

But Lerner said her work is far from done. She said the state still needs automatic voter registration, a switch from paper to electronic poll books and changes to allow some convicted felons to be able to vote when they are released from prison.

Stewart-Cousins and other Democratic lawmakers say they are still working out the details of those bills, and hope to pass them later in the year.

Senate Republicans said the expanded voting would cost too much money in a state already overburdened by high taxes. Sen. Kathy Young, a Republican from Olean, said she believes it won’t lead to higher turnout.

“Every day, we hear from our overburdened taxpayers about the cost of living in New York,” said Young, who added 200,000 people left the state last year.

“This bill, in chief, actually will drive up those costs even more, and we will lose more people,” Young said.

The action is expected to continue on Tuesday, when the Senate and Assembly are scheduled to vote on a bill that would for the first time grant civil rights to transgender New Yorkers.

Also on Tuesday, Gov. Andrew Cuomo will release his state budget plan, where he is expected to  reveal how much he wants to spend on items like health care and school aid.

The governor has already begun dampening the expectations of school funding advocates, saying he believes  New York no longer needs to heed a 12 year old high court order that said the state needs to spend billions of more dollars each year on it’s neediest schools. The State Board of Regents recommends that the education budget be increased by two billion dollars a year in the next school year.

Buffalo biology teacher  Eve Schippens was among a couple of hundred  funding advocates who came to the Capitol one day before the budget proposal. She says the money is long overdue.

“I’m still teaching in buildings that don’t have adequate resources from all of those years of being defunded,” Schippens said.

The governor is also expected to detail in his spending plan   just how the state will implement the sale of recreational marijuana for adults.