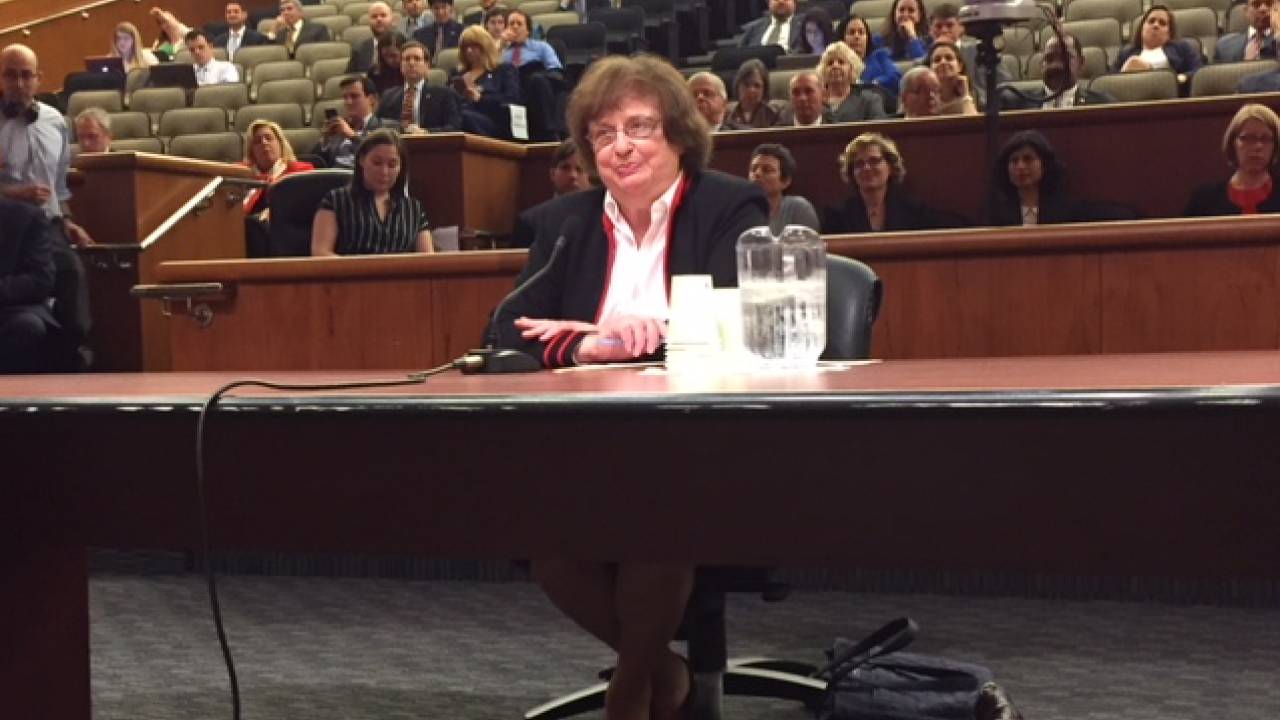 The state legislature began interviewing candidates to replace Attorney General Eric Schneiderman, who resigned over a domestic violence scandal. Up first was the current acting Attorney General, Barbara Underwood, who is the favorite to win the appointment.

“I think it’s an understatement to say that none of us expected to be sitting here today for this purpose,” Underwood told Senators and Assemblymembers gathered at a meeting room in the state Capitol complex.

Underwood was New York’s solicitor general, until May 8th, when Schneiderman resigned after he was accused of assaulting four women in acts that included hitting, slapping and choking. Schneiderman denies the allegations.  Underwood, who says she was stunned by the “deeply disturbing” accusations, says she views herself as a competent caretaker who will provide continuity in the attorney general’s office. And she says she will pursue policies and cases now in motion, including over one hundred lawsuits that Schneiderman filed against President Trump and his administration.

But she made clear that she has no political ambitions, and will not run for the Attorney General’s post.

“I am not a politician,” Underwood said. She says some people joke that the National Association of Attorneys General is actually the “national association of aspiring governors”.

“There’s some truth to that,” Underwood said. “But I can assure you that’s not who I am.”

Underwood, speaking to reporters afterward, says she thinks the hundreds of attorneys who work in the AG’s office were reassured by her quick assumption of the post of acting Attorney General, just one day after the accusations against Schneiderman were made public in the New Yorker magazine. She says it’s been a busy  week, and she considers it a great challenge during what she says is an important time in the country.

“I’m not sleeping very much,” she said, with a laugh. “I’m trying to do everything.”

Republicans who lead the State Senate favor Underwood, as does Governor Andrew Cuomo. Several newspaper editorials have voiced support for her.

Although the state constitution says the legislature appoints a successor when the Attorney General ’s post is vacant, in reality, the Democrats who lead the Assembly make the decision, because, with over 100 members, they have the largest faction in both houses.

Assembly Codes Committee Chair Joe Lentol, the highest ranking Assembly Democrat at the public interview, could not say whether Underwood would ultimately be chosen to fill the job. He says he and his colleagues take their constitutional duties seriously and are “unbowed” by the pressure.

“We believe that we have the constitutional power and right to do this,” said Lentol. “I think the framers of the constitution were smarter than we were, to allow us to provide the checks and balances against the executive branch that are necessary.”

There’s also a tight timetable for choosing a successor. On May 21st, the state Republican and Democratic conventions begin. Several candidates who chose not to go through the legislature’s appointment process, are expected to compete for their party’s nomination to run for Attorney General. They include Hudson Valley Congressman Sean Patrick Maloney, New York City Public Advocate Tish James and 2014 Democratic primary candidate for Governor Zephyr Teachout.

Assemblyman Lentol says he can’t commit to appointing the AG’s successor before the political conventions begin, saying it would be “difficult”.  He says his committee will make its recommendation to the Assembly Speaker, and then the full legislature will have a chance to vote on it.

Eleven others are asking to be named interim Attorney General. Among those interviewed Tuesday- Assemblymembers Tom Albinati and Danny O’Donnell, and former Congresswoman and New York City Comptroller Elizabeth Holtzman.