Legislative session draws to a close 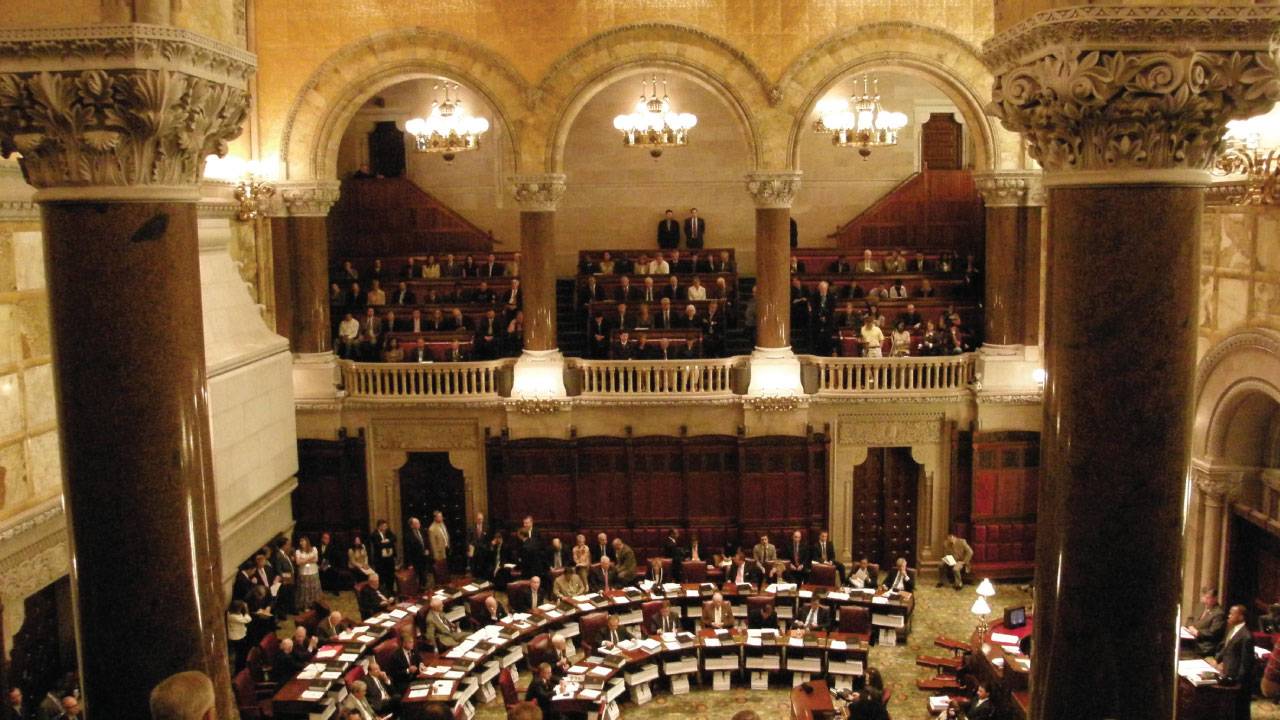 The legislature was closing down on an end of session deal that would strip convicted lawmakers of their pensions, extend mayoral control of New York City schools for one more year, and legalize Daily Fantasy sports gambling.

Legislators already agreed to expand the hours New Yorkers can drink alcohol, permitting drinks to be served at 10 am on Sunday, instead of the current noon starting time. On certain special occasions, bars and restaurants can apply for a permit to start serving liquor at 8 am.

But the sponsor of the bill, Senator John Bonacic said late Thursday evening that he still wants time on Friday to present the bill to a closed door Republican senate conference to determine if there are enough votes among Republicans to pass the bill.

“We’ll be back tomorrow, I’ve asked the majority leader to brief the conference,” Bonacic said. “And I’m optimistic we’ll have the votes in the Senate”.

Senator Bonacic concedes he may need votes from some Democrats in the Senate in order for the measure to pass.

Attorney General Eric Schneiderman halted the on line games last fall, but said they could resume if the legislature acted to regulate them.

Lawmakers had more trouble getting agreements on ethics reforms, in a year that’s seen the two former legislative leaders sentenced to prison and state and federal probes of Governor Cuomo’s economic development programs.  A measure to close a major campaign finance loophole involving Limited Liability Companies  has not gained traction in the State Senate, and other measures, including a crack down on super PACS, did not appear to be part of the final deal.

The one bill that was agreed upon would cancel the pensions of lawmakers convicted of a felony.

Earlier in the day, Assembly Speaker Carl Heastie vowed to resolve the issue, which had been agreed upon in March of 2015, but never actually voted on in the Assembly.

“It will be resolved one way or the other,” Heastie said.

Blair Horner, with the New York Public Interest Research Group, says it’s a “failure” if no other ethics reforms are approved in the 2016 session.

“The session that allows purchasing alcohol and betting on line as big accomplishments would be a far cry from what New Yorkers deserve and want out of Albany,” said Horner, who said New Yorkers are tired of seeing lawmakers do the “perp walk.”

“They expect Albany to clean itself up,” Horner said.

While legislators are extending the use of one drug, alcohol, they also acted to restrict the use of other drugs- heroin and opiates. The new measure makes it easier to get treatment , eliminating some roadblocks by health insurers. It focuses more on helping people than punishing addicts with jail time, says the Senate bill cosponsor Terence Murphy.

“It doesn’t matter if you’re black if you’re white, what religion you have,” Murphy said. “It has shaken down very, very, very good families.”

Homeless advocates are disappointed with the apparent failure, in the final hours of the session, to follow through with the bulk of Governor Cuomo’s plan to spend $2 billion dollars on supportive and affordable housing. 6000 of the 20,000 promised units were approved in the state budget. Homeless advocates, reacting to reports that just an additional $150 million of the total would be freed up in the final agreement, called it “ridiculously inadequate”. Assemblyman Andrew Hevesi, was pessimistic when he spoke earlier in the week on the issue.

“One of the worse kept secrets in Albany is that funding for  homelessness never seems to materialize ,” Hevesi said.

Another measure that seemed to be falling off the table as the session drew to a close- allowing ride sharing services like Uber and Lyft to operate outside of New York City. Assembly Speaker Carl Heastie said the measure was “on life support.”