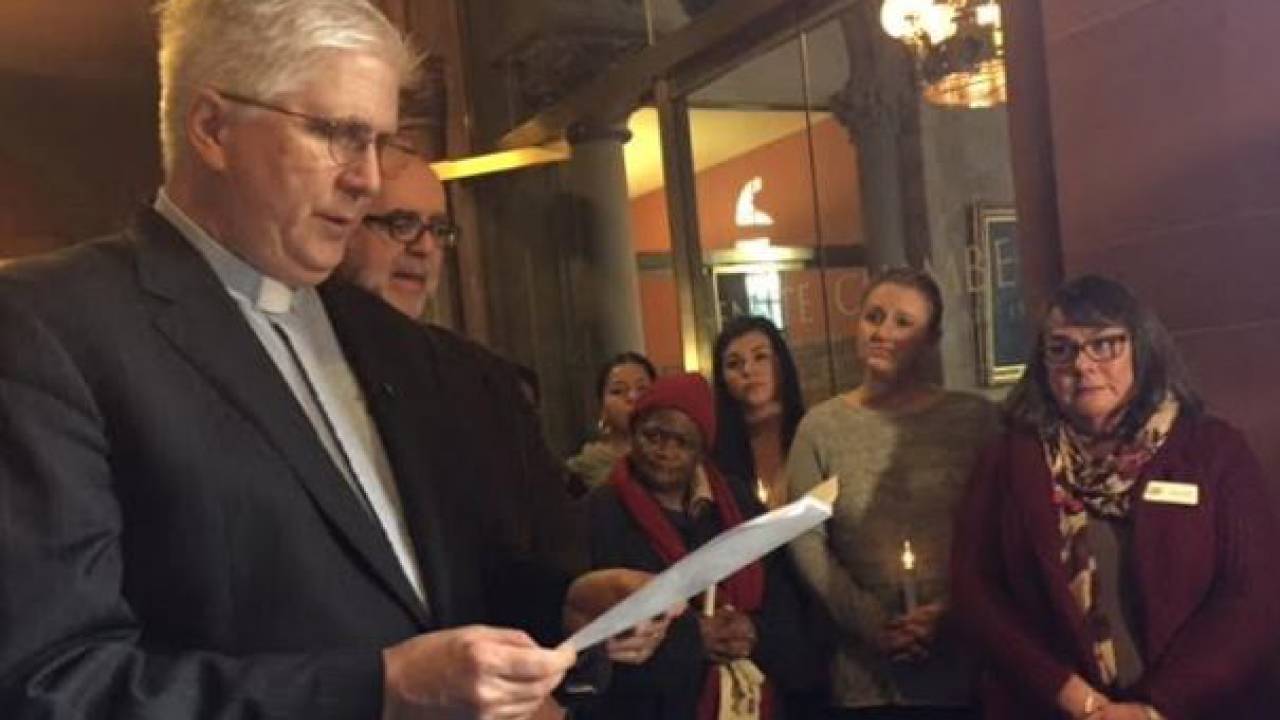 Advocates for the homeless say the Governor and legislature don’t need to call a special session in order to free up more money to help create more housing for those in need. They say political leaders could simply sign an already printed memorandum of understanding, and start helping people now.

Kevin O’Connor, director of Joseph’s House in Troy, New York, read the names of homeless clients who have passed away in the past year, who he says died too young.

“The average life expectancy of a person who is homeless in America is 52 years of age,” O’Conner said. “That’s 26 years younger than those who are housed.”

He and other advocates for the homeless, along with some formerly homeless New Yorkers, gathered for a prayer vigil outside the Senate chambers at the Capitol. They are asking Governor Cuomo and legislative leaders to address the growing number of homeless in the state, and free up funding for supportive, affordable housing before the end of the year. Cuomo and lawmakers have been discussing the issue as one of several that could be addressed part of a special December session that would include a pay raise for the governor and legislators. But Peter Cook, executive director of the New York State Council of Churches says the fate of the homeless should not be linked to other issues.

“For the 88,000 (homeless)  people in our state, they don’t get a pay raise,” Cook said. “They’re worried about whether they’re going to find a place to rest their head tonight.”

“Which is used as one more excuse not to address what I really think is a moral crisis,” Cook said.

Cook and the others say the legislature does not even have to come back to the Capitol to free up two billion dollars in funds. A Memorandum of Understanding between Cuomo and the legislature has already been drafted and does not need a vote by Senators and Assemblymembers. It requires only the signatures of the governor and legislative leaders. Cuomo has already signed the memo.

Terry Smith was homeless for a time in New York City when she was trying to rear two young children.

“People really don’t want to be pitied,” Smith said. “But when the night comes and the cold comes, that’s when you have to face the fact that ‘I could die. We’re really in danger’.”

Smith found housing in a hotel for the homeless.

“You have got to turn to society because there’s no way you can help yourself at that time,” Smith said.

But she says many were not so lucky.

Governor Cuomo, at an event in New York City, offered hope for a special session coming together before December 31st that would resolve the issue.

“We’re working in good faith, and in good spirit, to try to come up with a completed agenda for a special session,” Cuomo said.

The groups say all the uncertainty over when the funds for supportive housing will finally be released is making it harder to plan for any future housing projects, while the number of homeless New Yorkers is growing.