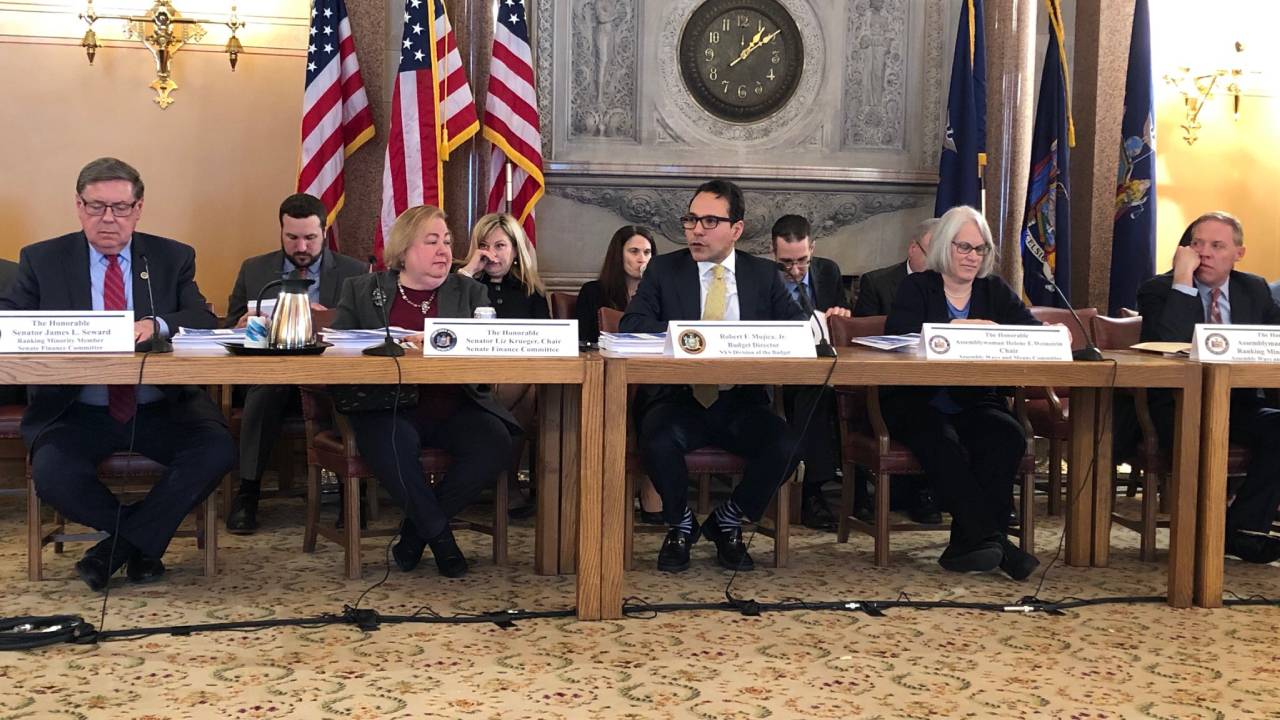 Economists and financial forecasters, speaking at the state Capitol as part of an annual consensus forecast meeting on the state budget, are warning of an impending recession in New York and the nation. The state is already experiencing some warning signs, with the governor’s budget office predicting a $2.6 billion dollar deficit.

Hugh Johnson, of Hugh Johnson Financial Advisors, told the yearly gathering of the governor’s and legislature’s top fiscal experts that the long economic recovery since the great recession of 2008 may be soon at an end. After a big drop in the stock market last fall, the indexes are again on the rise. But Johnson predicts the longest bull market in history to peak in the first quarter of 2020.  And he says after that things go down.

“In the third and fourth quarters of 2020, there’s a really good chance that we’ll be in a recession,” Johnson said.

Johnson says among the factors is the growing federal deficit, which will reach 5 percent of the Gross Domestic Product by the end of next year. He says he expects New York State to “mirror or track” the national economy, and he warned budget makers to proceed with care. He says if there is a recession, the growth rate of personal income tax collections, which make up a significant portion of the state’s tax collection will be cut in half.

Chris Varvares, with Macroeconomic Advisors by IHS Markit, agrees that there are signs of the economy slowing. He believes it will be what he calls a “growth recession”, with the job market still expanding, but not fast enough to provide jobs for everyone who needs one. Varvares says global events will also contribute to the slowdown, including the potential for a hard Brexit in the UK, and a technological industry slump in Europe, and slowing rate of growth in China’s economy.

“We’re very worried that a recession could be on the horizon within the next year or two,” Varvares said.

Johnson’s and Varvare’s forecasts are more dire than what is predicted in reports released by the state Senate and Assembly’s fiscal committees. Both see an economic slowdown but do not label it as a recession.

He and the governor blame the decline on federal tax code changes that curb the ability to deduct state and local taxes, known by the acronym SALT from federal income tax payments. Cuomo advocates keeping spending growth down, and Mujica, at the meeting, warned the legislature against imposing additional new taxes on the wealthy, saying the rich will leave the state.

“With SALT already encouraging tax migration, raising our top marginal tax rate would be that much more difficult and detrimental,” Mujica told lawmakers. “Losing even a small number of our top taxpayers threatens the viability of education, health care, and infrastructure spending programs.”

Senate and Assembly analyses think the current tax collection shortfall is really more of a timing problem. They say some taxpayers overpaid state and local taxes in late 2017 and early 2018, and that is reflected in the late 2018 drop. They believe tax revenues will recover, and even increase in 2019.

Jared Walczak, with the Tax Foundation, a business-friendly Washington based think tank, says he doesn’t think SALT is the biggest cause of the state’s deficit, he thinks it’s more a result of the steep decline in the stock market last year. But he agrees with the governor that  New York should be cautious about further taxing its wealthiest taxpayers, in a state that already has very high state and local taxes.

“Tax migration is real,” Walczak said. “I think the governor is absolutely right to express that there is a tipping point.”

He says he does not think rich New Yorkers will actually physically move out of the state. But he says they could shift some of their assets, like their primary residences, to other states.

The state for the past decade has imposed a tax surcharge on those making more than a million dollars a year.

Walczak says the state’s economy has done very well even with that tax, but he says a recession could change that.

“Clearly New York has done very well despite the millionaires' tax,” he said. “But it is more salient now.”

The governor’s budget office and the fiscal committees need to agree on exactly how much there is to spend in the new fiscal year that begins April 1. The Senate and Assembly, in their analyses, say they think the governor’s estimates are off, and there is actually around half a million more dollars to spend next year.