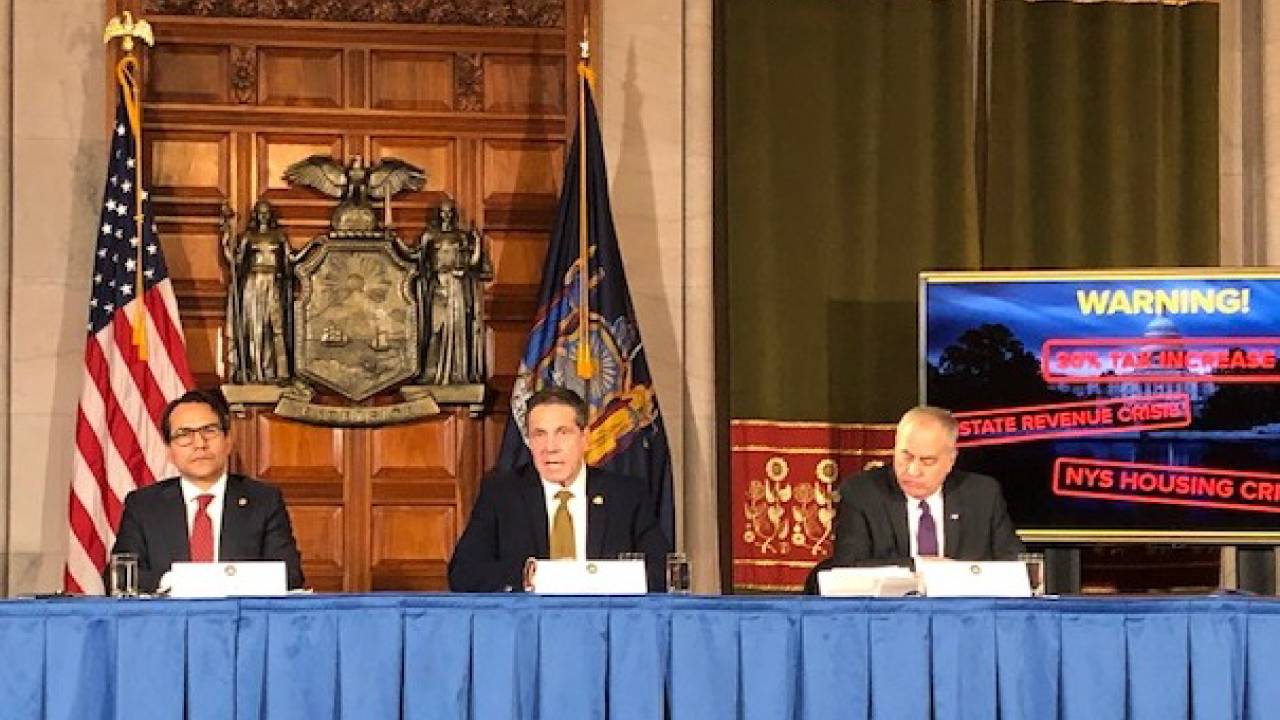 Governor Andrew Cuomo and the State’s Comptroller delivered some bad news Monday -  the state has a $2.3 billion dollar budget deficit. Cuomo blames the decline on federal tax changes that he says penalizes blue states, but there are other factors at play, too.

Cuomo, along with Comptroller Tom DiNapoli, says he is sounding the alarm after reviewing the results of the January quarterly estimated tax payments. Cuomo says the collections are even “worse than anticipated”, and “as serious as a heart attack”.

Comptroller DiNapoli says it’s the biggest hit to the state’s finances in some time.

“This is the most serious revenue shock that the state has faced in many years,” said DiNapoli. “Frankly, governor, I think it will get worse before it gets better.”

Cuomo blames the deficit on changes made to the federal tax code in 2017 by President Trump and the then- Republican-led Congress. The tax code now limits the ability to deduct state and local taxes from federal income taxes. Those changes adversely affect states like New York with relatively high state and local taxes. The higher tax states are also largely Democratic,  and the governor has said for months that he believes the blue states were unfairly targeted.

“What is galling about this to me is that it’s all politics,” Cuomo said.

The governor concedes that other factors also led to the deficit, including the big drop in the stock market in December, which is the major factor in the lower than expected January estimated tax payments. The decrease could also affect the amount of money traders receive in the annual Wall Street bonuses, which the state relies on for a portion of its tax revenues.

Cuomo says, as a result, the spending plan he proposed just three weeks ago is now “unsupportable”. But he is not at this time proposing specific spending cuts or delays in a planned middle-class tax cut, saying he needs to consult with the legislature first.

Many Democrats in the legislature, including several newly elected State Senators, favor imposing new, higher tax brackets for  New York’s richest residents as a means to pay for new programs,  The state already imposes an income tax surcharge on New Yorker who make more than a million dollars a year. Cuomo warns against adding additional tax tiers to the wealthy, saying New York already imposes the second highest taxes on millionaires in the nation.

The governor says he has heard that some wealthy New Yorkers “might” be moving their permanent residence to a different state, but at this point has no hard numbers.

Other Democratic legislators support programs that would add billions of dollars to the budget, including single-payer health care, and fulfilling a 12 year old court order that says New York State needs to spend billions of more dollars on its public schools in order to ensure the state’s constitutional requirement that every child gets an equitable education.

Cuomo says the newer members of the legislature may have to face what he calls “budget realities”.

Members of the legislature say they are not yet as worried about the potential gap as the governor and the Comptroller.

Assembly Speaker Carl Heastie agrees that the changes to the federal tax code have hurt New York, but he says it’s too early to tell how disruptive the effect might be.

“It’s still a little too early to determine what we can and can’t do, is this just a blip, is this just a delay?” Heastie said. “When we find out what’s the real cause behind the reductions in revenues then we can make a more formative opinion on where we go from here.”

The Speaker says Assembly Democrats continue to believe the state can afford additional spending on education and other needs.

“The Assembly’s priorities are always going to continue to be trying to get resources to our communities, particularly for education and health care,” Heastie said. “Those commitments will never change.”

Some economists are predicting that a national recession may be beginning, but the governor’s budget director Robert Mujica disagrees. But Mujica says while his analysts are not forecasting a recession, they do believe, based on the new revenue numbers, that the state is in the midst of an economic slowdown.