April special election could flip state Senate to the Democrats 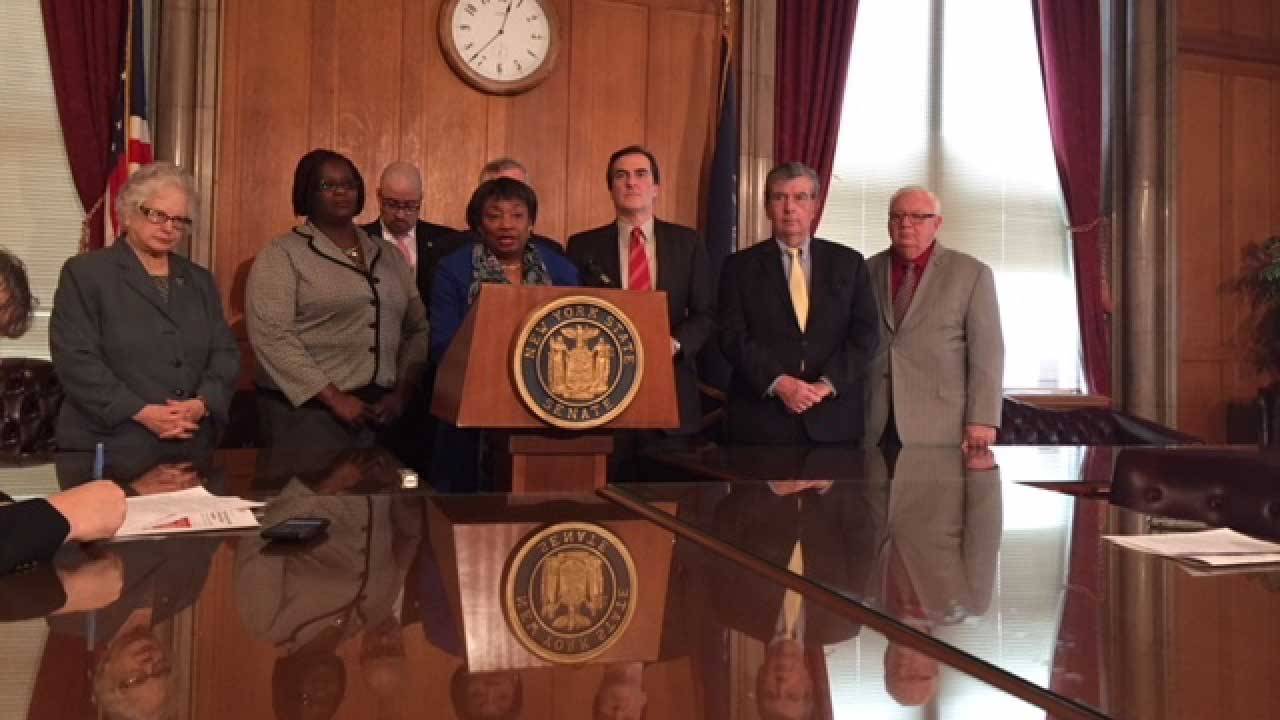 Governor Cuomo is expected to call for special elections on April 24th for two empty Senate, according to a state official who confirmed the date. The news is fueling hopes among Senate Democrats that they can gain control of the chamber before the end of the session.

The two Senate seats are vacant because two senators, both Democrats, were elected to local government positions last November. They are both in heavily Democratic districts, and if the party’s candidates win the seats in the special election in April, then they would have the numerical majority required to take back control of the Senate from the Republicans.

Senate Democratic Leader Andrea Stewart -Cousins says if that happens, she hopes one of the first measures the Senate will act on will be campaign finance reform. Senate Democrats presented bills on Tuesday at a news conference.

“I feel like I’m stuck in Groundhog Day,” said Stewart-Cousins, who spoke just before the special election date was confirmed. “We do this every year.”

The bills would, among other things, establish a public campaign financing system and close a loophole that allows campaign contributors to skirt donation limits by setting up multiple LLC’s or limited liability companies. The measures also create a new state crime of “self-dealing”. It would prohibit state officials from steering public contracts to help themselves or their families. Governor Cuomo’s former closest aide, Joe Percoco,  is currently on trial in federal court,  accused of engineering two bribery schemes involving donors to  Cuomo’s campaign.

Democratic Senator Gustavo Rivera and the other Senate Democrats say the bills have been introduced many times, but have been blocked by Republican Senators who don’t support them. Rivera says he hopes that will soon change.

“If this majority won’t do it, the next majority damn sure will,” Rivera said.

If the Democrats win the special elections in April, it would not be the first time in recent years that Democrats have held the 32 seats needed to run the Senate. But they have been split into feuding factions and unable to unite. A group of 8 breakaway Democrats, known as the Independent Democratic Conference, has in the past formed a coalition with Republicans to jointly hold the chamber, leaving the rest of the Democrats in the minority. The independent Democrats and the mainline Democrats have agreed to form a coalition if their party wins the two seats in the spring special election.

But there’s still a wild card. One lone Democrat, Senator Simcha Felder, continues to meet with the 31 GOP Senators, giving them the 32 seats they need to maintain the majority. Felder would need to agree to switch to caucusing with the Democrats.

The April 24th date for the special elections means that the new Senators will not be elected in time for the budget deadline of April 1st. Senator Stewart Cousins, says that means Republicans will control the chamber throughout the budget process and be the lead negotiators for the Senate with Governor Cuomo.

“It means that we will not, assuming the budget is on time, be able to have anything before the budget is done,” Stewart –Cousins said.

Minority Party leaders have been traditionally excluded from the meetings, which have become known around the Capitol as the “three men in a room” because they typically include the governor and two major party legislative leaders, who so far have all been male.    This year, the governor has requested as part of his budget plan an overhaul of the state’s anti-sexual harassment laws. Senator Stewart- Cousins, the only female legislative leader, was asked how she felt about potentially being left out of those meetings.

“We’re not a small conference, we represent half of New York State,” Stewart-Cousins said. “We deserve a seat at the table.”

But she admits “my expectation is (often) different than reality”.

After the special election date was made public, Stewart-Cousins issued a statement, saying, “we have the opportunity to make New York State the 9th ‘true blue’ state in the nation, and with all Democrats working together to achieve that goal, I know we will succeed”.

Nine state Assembly seats are also vacant, and special elections for those posts will also be held on April 24th.