All candidates for governor but Cuomo attend debate

During the only upstate debate of the 2018 New York governor’s race, the incumbent was criticized for both his record — and his absence.

Governor Andrew Cuomo didn’t attend the Thursday night debate, held at The College of Saint Rose in Albany, and sponsored by the League of Women Voters. His campaign said he was busy talking directly to voters in the days before the election and couldn’t come.

But the four other candidates in the race showed up and discussed issues ranging from gun control to education. They also criticized the governor’s record on economic development, corruption scandals that led several of his former associates to be sentenced to prison for corruption, and what they said was the slow pace of action on anti-sexual harassment policies.

Republican Marc Molinaro offered a plan to reduce property taxes by a third, in part by having the state take over Medicaid costs. Molinaro, who is the Dutchess County Executive, says the state needs a reset.

“After eight years of the status Cuomo, we have the highest taxed state in America,” Molinaro “We have the most corrupted state government by any measurement. And we are stealing (from) and defrauding taxpayers.”

Independent candidate Stephanie Miner says her experience as Mayor of Syracuse for eight years is an asset for a governor. She says she worked to raise high school graduation rates and repaired the city’s crumbling infrastructure, including water and sewer lines.

Miner worked for Andrew Cuomo’s father, Mario Cuomo in the 1990’s, but feuded with the current governor over state aid to cities. She says state government is “broken”, and needs to focus on “substance, not optics”. Miner says if elected, she’d open up the secretive nature of the decision making process for the budget and other major policy changes.

“If you elect me, I’ll end three men in a room, obviously,” she said, to laughter. Miner says she’d also like to reform the state’s campaign finance laws and get rid of the LLC loophole that allows donors to skirt donation limits.  She says she’d also end the “pay to play” economic development programs begun by Cuomo.

The Libertarian Party’s Larry Sharp supports legalizing marijuana and growing the bitcoin industry. He advocates fewer rules for teachers and wants to end 11th and 12th grade and instead give every child a $20,000 stipend to use for prep school, college or vocational training. Sharpe said he’d revive mass transit by selling naming rights to New York City bridges to high tech companies like Amazon and Google. He told the audience that he is the only true alternative to the stranglehold of the Democratic and Republican parties.

“Democrats have no plan, Republicans have no plan. You heard nothing but plans from me,” Sharpe said. “You may not like those plans. You might think they’re wrong or they’re bad. But I have them.”

Green Party candidate Howie Hawkins offers what he calls a “Green Deal” for New Yorkers, including single-payer health care, a shift to 100% renewable energy by 2030, full funding for schools, the elimination of charter schools, and a true $15 minimum wage for upstate New York.

Hawkins says it’s a disservice to voters that there were only two debate forums in the entire general election campaign, and that Cuomo only showed up for an event that excluded third-party candidates.

“Shame on Andrew Cuomo for not coming here,” Hawkins scolded, as the audience applauded.

The League of Women Voters, in a statement, expressed frustration that the Governor did not participate, saying they don’t understand why Cuomo “does not feel a fair, nonpartisan, debate is an appropriate venue to speak directly to voters”. 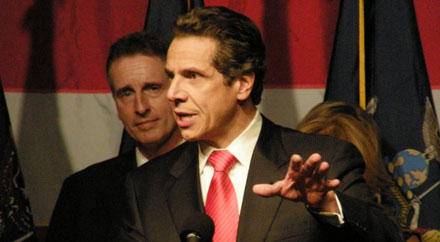