Democratic primary voters on Thursday have a choice of four candidates for state attorney general after former AG Eric Schneiderman resigned in May over allegations he physically abused several women that he dated.

Zephyr Teachout, a Fordham Law Professor and 2014 Democratic candidate for Governor, has focused her left-leaning campaign on fighting President Trump and his administration, saying the country is in the midst of a “democratic and constitutional crisis”, and that the New York Attorney General’s post is the “most important legal office in the country right now”.

“I believe and I know, and I feel it this year, that New York State is really on the verge of major change,” Teachout said.

In 2018, several former associates of Governor Andrew Cuomo have been convicted of bribery and bid-rigging, and two former legislative leaders were convicted in retrials on corruption charges.

Teachout says if she’s elected, she’ll immediately look at recent actions by  Governor Cuomo and his office. They include the use of state offices by Cuomo’s former top aide, Joe Percoco, while Percoco was on leave to run Cuomo’s 2014 election campaign, and whether Cuomo sacrificed public safety and prematurely opened the new Mario Cuomo bridge for political reasons.

“Right now we need a permanent referral to look into both civil and criminal violations of sexual misconduct,” she said. “We’re in emergency status.”

New York City Public Advocate Tish James has the backing of the state Democratic Party, and Cuomo, as well as several major unions. Her opponents question whether James could be truly independent of the governor. She’s said repeatedly that she would.

“I’ve been an independent all my life,” said James. “Although the governor may have a strong personality, I’ve got an even stronger personality.”

James also says fighting republican policies in Washington and rooting out corruption in state government is important. She says she’d try to revamp the troubled state ethics commission and would ask the legislature for greater powers to pursue corruption cases. James, a former New York City Council member who got her start working for the Legal Aid Society, would also like to improve consumer protections and tenants’ rights, strengthen New York’s rent regulations, and protect immigrants impacted by Trump Administration policies.

James is one of two African American women running in the race. If either she or Leecia Eve, an attorney from Buffalo, were elected, the winner would become the first black woman to be Attorney General in New York.

Eve, who is a vice president for Verizon,  has worked for prominent Democrats including  Joe Biden, where she helped craft the Violence Against Women Act. She also was Cuomo’s chief economic development adviser from 2011 to 2013. Eve was appointed by the governor as a commissioner to the Port Authority of New York & New Jersey, and she continues to hold that post.

Eve also believes she would be an independent attorney general. And she says as the daughter of prominent former Assemblyman, Arthur Eve, she’s appalled by the corruption in state government.

“We’re the poster child in the country for corruption,” Eve said. ”

But Eve says she does not hold Cuomo personally responsible, and she’s backing the governor in his primary race. She says if elected, she’d also combat the Trump Administration, and return to an earlier role of the Attorney General’s office as the “Sheriff of Wall Street”.

“The last thing that we need are corporations, whether within the financial services industry or outside of it, that are taking New Yorkers for a ride,” Eve said. “I would proudly wear the label of being the “Sheriff of Wall Street’.”

Hudson Valley Congressman Sean Patrick Maloney, who is narrowly the frontrunner in the polls, was a senior adviser in the Clinton White House. He also worked in the administrations of former New York governors Eliot Spitzer and David Paterson.  Maloney, like the other candidates, believes the next Attorney General must address corruption in state government.

“Public corruption is killing our state and we need to hit it with a sledgehammer,” Maloney said. “And the Attorney General can be part of the solution.”

Maloney, like Eve, says he does not believe the corruption is all the governor’s fault,  saying  “there’s more than enough blame to go around”. But he says  Cuomo made a “terrible mistake” when the governor shut down a Moreland Act Commission on corruption before it finished its work. And he says he believes it’s time for term limits for state elected officials.

Maloney says he’d use the state’s Martin Act to go after potential wrongdoing in the financial industry. He also wants to pursue legal action against the Trump Administration. And he says he’d find a way to force Donald Trump to release his tax returns through the ongoing attorney general’s office investigation of the Trump Foundation.

“But I think they are coming out sooner or later, they sure as hell ought to,” said Maloney. “It’s outrageous that it’s going to take this kind of effort to get this kind of disclosure we should have had from the get-go.”

Maloney says the state should pass a law requiring that all Presidential candidates who want to be on the ballot in New York must release their taxes.

Maloney is also running for re-election to his Congressional seat for a fourth term. If he wins the primary Thursday, he would be the first openly gay state Attorney General and statewide elected official.

In a Siena College poll this week, Maloney had the support of 25 percent of likely Democratic voters, James had 24 percent and Teachout had 18 percent. Eve trails at 3 percent. But 30 percent are still undecided, making it a wide open race. 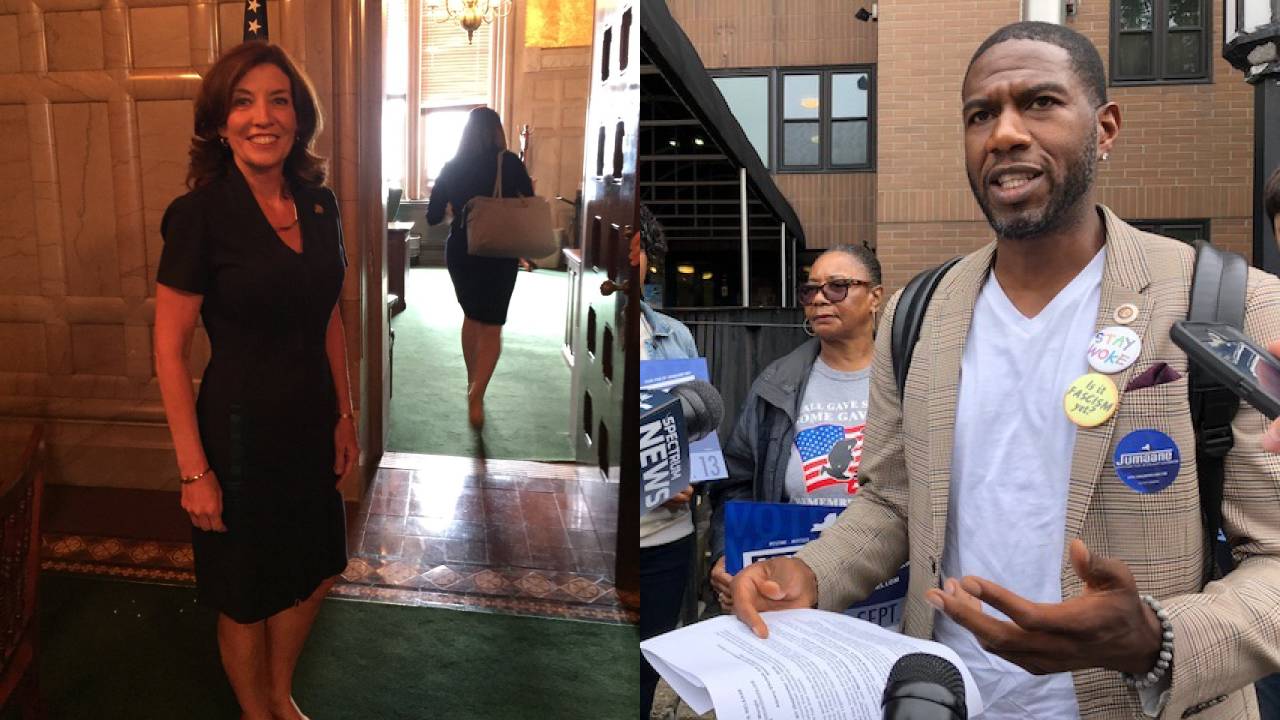