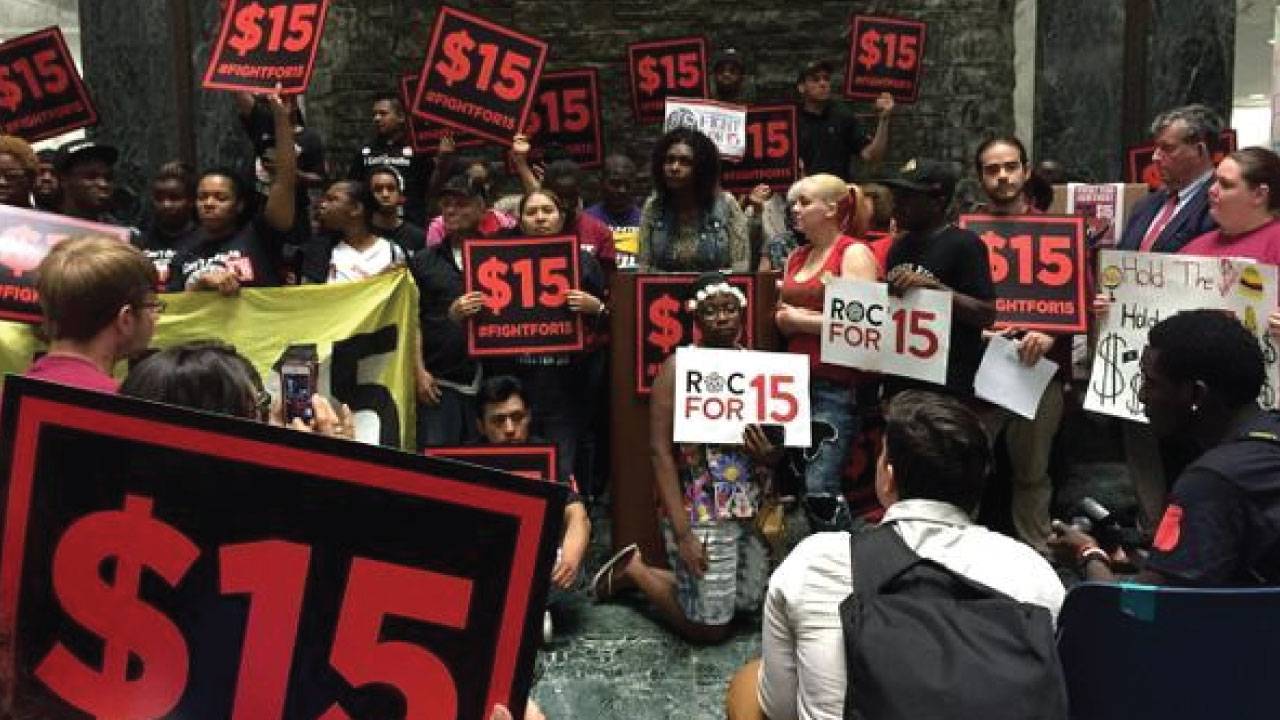 While supporters are declaring victory over New York’s new higher minimum wage for fast food workers, the action, by a state wage board,  highlights a larger question why are so many in the state dependent for their livelihoods on what are essentially entry level work force jobs.

The victory celebration by fast food workers and the state’s major union leaders also featured Governor Cuomo. The governor, who appointed the board when Republicans in the legislature were reluctant to act, predicts more actions to come.

“It is just the beginning,” said Cuomo who said he would not stop until the minimum wage is increased for “every worker in every job in this state."


Cuomo, speaking to reporters, said he does not think he’ll appoint another wage board to address other sectors of the work force, but will try again for a bill. He says the current minimum wage of $8.75 an hour is “unlivable” in New York.

But both backers and opponents of the multi year phase in to $15 an hour for fast food workers say there’s a larger concern here. Why are so many New Yorkers, an estimated one point eight million, working for years at either the minimum wage or just above it, doing jobs that used to be considered entry level positions?

“There’s a broader issue that really went unexamined in this process,” said Ken Pokalsky, with the New York State Business Council, whose group opposes the hike to $15 dollars.

He  says cooking burgers or, even being a sales clerk at a chain store , did not used to be a career but a “first step” towards something better.

Karen Scharff is with Citizen Action,  a group that has long worked to raise the minimum wage. She agrees that it’s “a serious problem” that so many New Yorkers are stuck for decades in entry level jobs,  but she attributes it to a different problem and proposes another solution.

“The cause of it is that, all the wealth that’s being created in our economy is going to the wealthiest people at the top, the CEO’s, the stockholders and not the workers,” Scharff said. “And that’s a huge transformation in how our economy works from decades ago.”

She says when the top earners do better , everyone else does worse.

Governor Cuomo also brought up income inequality in his speech to the workers and union members.

“When you have a growing income inequality that sees fewer and fewer Americans becoming richer and richer and more and more Americans  working harder and getting left behind,” Cuomo said. “It is a shame.”

Cuomo, who until recently had a good relationship with the business community, has also worked to try to encourage more higher paying jobs, through tax free zones at college campuses to attract new high tech companies, and a property tax cap.

In the end, it may be market forces that determine whether workers mired in low wage jobs see raises. Scharff, with Citizen Action believes that even without a law to raise the minimum wage for all sectors of the economy, retail businesses will pay their workers more, or risk losing them to higher paying fast food jobs.